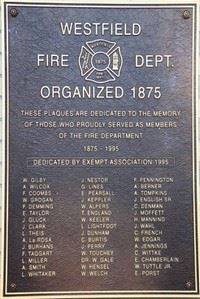 Did you know that the Westfield Fire Department is one of the oldest service institutions in town?

One hundred and forty years ago, Westfield was a small village of less than 875 people with "board sidewalks, dirt roads, oil street lamps and high bicycles" according to Colonial Westfield Past and Present. At that time, in the event of a fire, anyone available would attempt to extinguish the flames using buckets filled with water from nearby wells or streams. Then the earliest recorded conflagration in Westfield happened. On August 10, 1874, a fire began in Dr. Gales stationery store and spread east and west on East Broad Street, destroying everything in its path. According to newspaper accounts at the time, "Yankee ingenuity saved the 3-story Darsh bakery and apartments, separated from Whitaker's store by a narrow lot. Carpets were strung from the roof along the side of this building and a continuous stream of water poured over them. Every pail, bucket or other container in the village was requisitioned for this work." The extent of this fire's destruction led to the formation of the Westfield Fire Department Association, a citizen's committee with a mission to recommend the best method of establishing an official fire fighting organization. As a result of the Association's efforts, the Westfield Hook and Ladder Company Number 1 held its first meeting on March 1, 1875 and so the seeds of what we now know as the Westfield Fire Department were planted. Under an act of the State legislature, the Westfield Hook and Ladder Company Number 1, a volunteer organization, was incorporated on November 10, 1876 for a term of 50 years.

On land donated by one William F. Peck and located at what is now known as 121 East Broad Street, the Association financed the construction of the very first Westfield fire house through "public conscription". Ringing of the Prospect Street School and Presbyterian Church bells served as the first fire alarm signal. The Company's first apparatus consisted of a hand drawn hook and ladder truck and a hand drawn chemical pumping engine. Although not much is known about the first hook and ladder truck, the pumper was purchased for $250 and named "Little Giant" after Stephen S. Mapes, a member the Association who was affectionately described as "an energetic and peppery little man". Retired long ago from service, "Little Giant" is still an honorary member of our Fire Department and is housed at the present day Fire Headquarters!

From 1883 to 1922, horses named Dick, Tuck, Fred, Hugh, Bill and Bob were used to pull the wheeled fire apparatus. To keep them exercised properly when not in use by the fire department, they were loaned to the Public Works Department. Amusingly, the horses were also a source of revenue - their manure was sold! The first motor driven apparatus, a Webb pumper, was purchased in 1911 for $8,500 and is thought to have been the first motor driven apparatus in all of Union County.

Adjusting to a Growing the Town

Growing, Westfield changed its form of government from a township to a town in 1903. Shortly thereafter, the Fire Department was completely reorganized into 3 companies (Hook and Ladder Co. Number 1, Empire Engine Co. Number 2 and the Bucket and Engine Co. Number 2) establishing the "Fire Department of the Town of Westfield" and creating the first paid position of Chief Engineer. On February 28, 1904, the Town Council appointed Frederick Decker for a salary of $100 per year. Chief Decker served for 34 years! By 1925, when the department celebrated its 50th anniversary, it was staffed by volunteers and a paid sector that included the Chief, 2 Captains and 6 firefighters who worked an 84 hour work week.

Formally opened in May of 1911, the present fire headquarters at 405 North Avenue West was designed by Charles H. Darsh in the "Moorish" style and built on land purchased in 1887 for $450. Costing a grand total of $23,000 to complete, the new building originally contained seven horse stalls, a stable area, and space for apparatus. Though the building has been necessarily modified over the years, its basic architectural lines have been preserved and in 1980, the Westfield Fire Headquarters Number 1 was officially listed on the New Jersey  and National Registers of Historic Places. 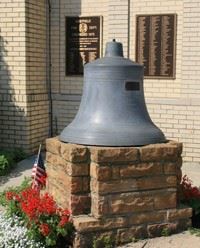 Jumping forward to 1953, the Town Council abolished the 3 separate companies and officially reorganized the department as a "combination department" with a paid division and a volunteer company. Today, all firefighters are considered professionals in that they receive extensive specialized training to perform their duties. Those who are paid are referred to as "career" fire fighters while those who are unpaid are referred to as volunteer fire fighters. In 1961, at a time prior to the formal establishment of the modern mutual aid network and wanting to assure a prompt response south of the railroad tracks should there be a railroad accident impeding access, the Town Council approved the construction of a second fire house on town-owned property at 1029 Central Avenue. At a cost of $112,100, Fire Station II was completed and opened on August 1, 1963.

Fire fighting techniques and apparatus have come a long way since the days of hand drawn pumpers and buckets. With the advent of effective building and fire codes, the availability of fire suppression systems, the widespread use of smoke detectors and fire alarms, enhanced communication abilities, modifications in materials manufacturing standards, and the like, the face of fire fighting has changed. Today, the Westfield Fire Department is equipped with modern apparatus to manage a multitude of scenarios. The current fleet of vehicles includes four engine companies and this June, the Town is expecting delivery of a custom built 100 foot aerial ladder truck with multiple capabilities. And the water supply is plentiful. In addition to holding tanks on the engines, there are currently over 720 fire hydrants in Town owned by the New Jersey American Water Company (NJAW). The Town pays NJAW over $500,000 dollars per year to annually inspect, keep properly pressurized, and maintain the hydrants.

Did you know that only 25% of New Jersey communities employ a career fire department and, according to FEMA, only 3.5% of the communities in the entire nation have a mostly career (career plus volunteer) fire department? The present day Westfield Fire Department is composed of the career Fire Chief, Deputy Fire Chief, 5 Battalion Chiefs, 9 Captains, 20 career fire fighters, and currently there are no volunteer fire fighters.  All are extensively trained and certified at the firefighter 2 level in accordance with the state fire code. Furthermore, majority of the career members of the department are certified emergency medical technicians and all the officers are certified NJ State fire inspectors.

Steeped in the great tradition of Westfield fire fighting, Westfield is fortunate to have a present day career (paid) fire department at its service 365 days a year, 24 hours a day.