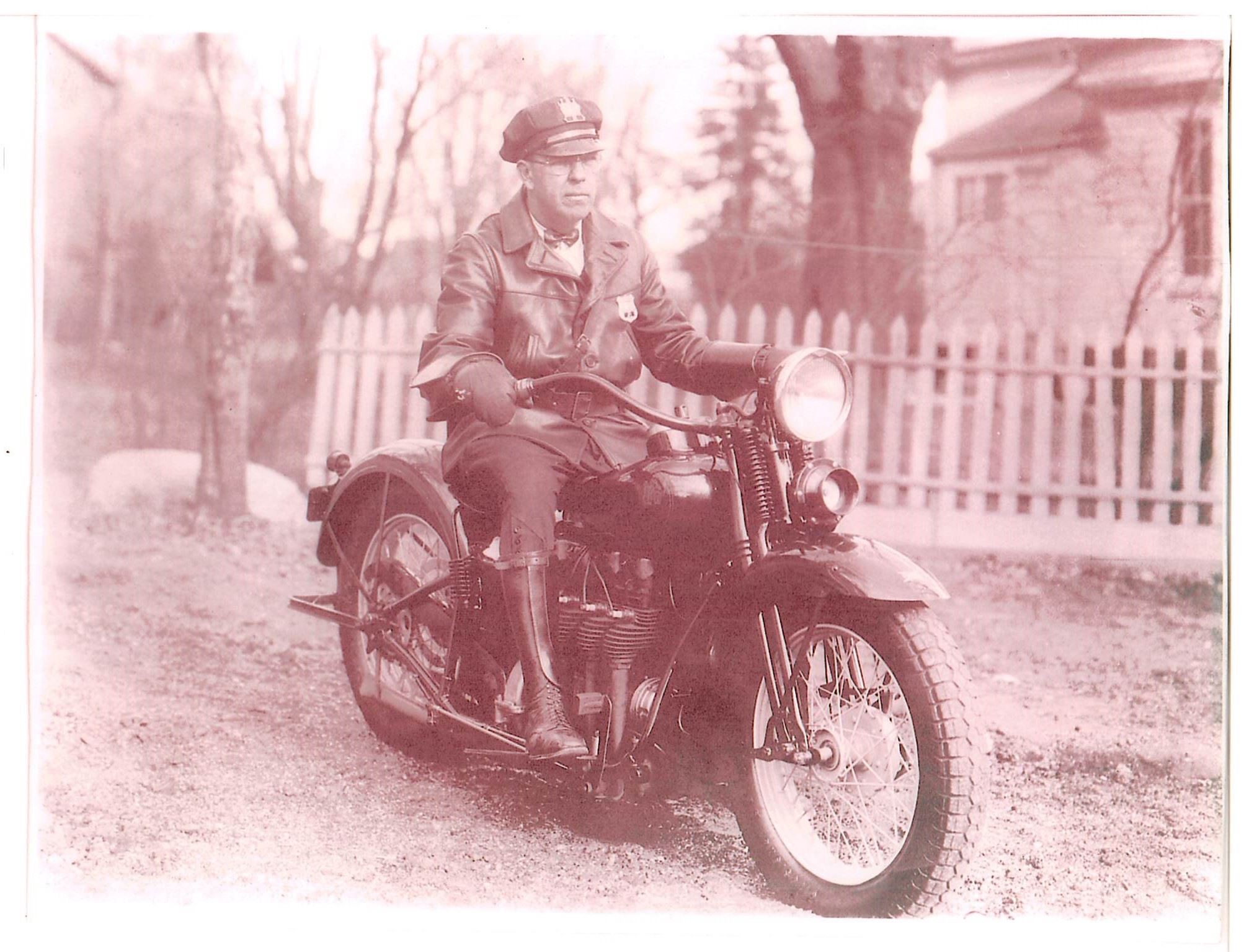 Patrolman Edgar B. Wright, known to all of Westfield as “Doc,” of 114 Cowperthwaite Place, died on Tuesday, February 22, 1938, as a result of injuries sustained in the line of duty on Monday, February 21, 1938, when his motorcycle was involved in a collision with a car at the intersection of North and Dudley Avenues.

In addition to a concussion of the brain, both of Patrolman Wright’s legs were broken and he suffered internal injuries.  He was taken by town ambulance to Muhlenberg Hospital, where he died at 6:10 AM on the following morning after an operation to save one shattered leg.

Patrolman Wright, 39, had been a member of the Westfield Police Department for 15 years.

According to an article published in the Elizabeth Daily News on Thursday, February 24, 1938, the driver of the car, Walter Frazer, 64, of 122 Farley Avenue, Fanwood, was arraigned on a charge of causing death by operation of a motor vehicle and was held on $1,500 bail.

Patrolman Wright, the son of the late Dr. Joseph E. Wright, was born in Morristown on June 27, 1898 and moved to Westfield with his family in 1903.  He attended Westfield High School and Pennsylvania Military College.

Patrolman Wright served for 2 years on the force after leaving college, but then left for a time.  He was re-appointed to the force on January 18, 1925, and had served as a Patrolman until his death.

Patrolman Wright always rode the motorcycle while on duty, and he was known for his utter impartiality towards violators.  A ticket from Patrolman Wright was virtually the same as a conviction, as he never issued an underserved summons.  He took his work seriously and was respected locally for his fairness.

Following his accident, the police station handled innumerable calls from local and out-of-town friends inquiring for his condition.  Many people visited the station personally to ask about him.

“Doc” was one of Westfield’s traditions.  Residents remembered him as an expert athlete in his youth.  He was prominent in football, wrestling and boxing, and appeared in exhibitions frequently at the YMCA and other sporting centers.  He had two hobbies in recent years: bowling and motorcycles.

“Doc” enjoyed the reputation of being a “tough” cop, but to his many, many friends who saw beneath his “tough” exterior, there was heart as big as a house.  He was particularly fond of children, and his charities at Christmas time in their behalf were known only to his most intimate associates.

In the tragic death of Patrolman Wright, the Westfield Police Department lost one if its most capable members.  He died in the performance of his duty, a duty which, to him, was always of paramount importance.  No police force ever had a more conscientious member than he.  His integrity and zeal won for him the high respect of his fellow officers, as well as town officials.

Then Chief of Police John R. Schreiber, in a statement, offered high praise for Patrolman Wright.  “His fine sense of duty and responsibility, his willingness in undertaking any job given him, his loyalty to his oath of office and his efficiency in the discharge of his duty has been and will be an inspiration for us all.  Officer Wright’s fine reputation was known and respected not only in Westfield, but in all parts of the county and the state.  He was widely known in police and other circles as a man of outstanding ability and possessing a high sense of fairness.  He was fearless and fair in the discharge of his duties regardless of how distasteful they may have been to him personally, but he was never accused of being unjust.  There can be no higher praise for a police officer than this.  The police department has lost a valuable member and the town an officer of the law and a personality that will be sorely missed.”

Following impressive funeral rites held on Thursday, February 24, 1938 at Gray’s Funeral Home which was attended by hundreds, Patrolman Wright was buried during a private interment the following Saturday morning in Fairview Cemetery.  Members of the force served as pallbearers.